I already wrote a blog post about why you might want many clusters and Mikkel gave a great talk at KubeCon EU 2018 on how we continuously deliver our Kubernetes infrastructure (check it out on YouTube!). This blog post is merely a recap and aggregation of existing information.

Zalando has 200+ development teams which are fully responsible for owning their applications including 24/7 on-call support ("you build it, you run it"). Our Kubernetes platform team provides "Kubernetes as a Service" to 1000+ Zalando developers with the following goals in mind:

We provision clusters always in pairs, i.e. one production and one non-prod cluster per domain / "product community".

Each cluster lives in a completely new and isolated AWS account. The basic AWS account infrastructure (VPC, routes, ..) is configured via a custom Python tool (Seven Seconds) and looks the same for Kubernetes and non-Kubernetes accounts (our soon to be EOL "STUPS" infrastructure).

Our whole production cluster configuration is located on GitHub. The cluster is created via CloudFormation (CF) templates. There are at least four CF stacks per cluster:

Note that we don't use any Terraform (we never did).

Both master and worker nodes run our self-baked AMI. The AMI is based on Ubuntu and contains all necessary Docker images for Kubernetes. We used CoreOS ContainerLinux before, but decided to switch to a more mainstream distribution with a more promising future. The pre-baked AMI also allowed us to improve node boot time (i.e. faster scale out for clusters).

All clusters, as well as AWS accounts, are registered in a central Cluster Registry. The Cluster Registry is a proprietary REST API backed by PostgreSQL. You can find its OpenAPI specification on GitHub. Each cluster has a number of attributes:

See also my blog post on Kubernetes Web UIs and their missing support for multi-cluster use cases.

The Cluster Lifecycle Manager (CLM) continuously monitors both Cluster Registry and our central git repo for changes. Changes are applied by the CLM: 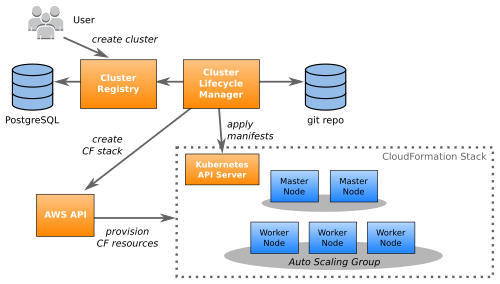 Changes (e.g. a version update of some system component) are initiated by opening a Pull Request to the "dev" branch (channel). Every change PR is automatically tested end-to-end (e2e) and only merged after passing tests and human approval. The e2e tests run official Kubernetes conformance tests and Zalando-specific tests against a newly bootstrapped cluster. E2E tests coverage includes:

Each e2e test run currently takes 35-59 minutes to complete. Here some example PR where the e2e tests completed successfully and only the human approval ("+1") is missing to merge: 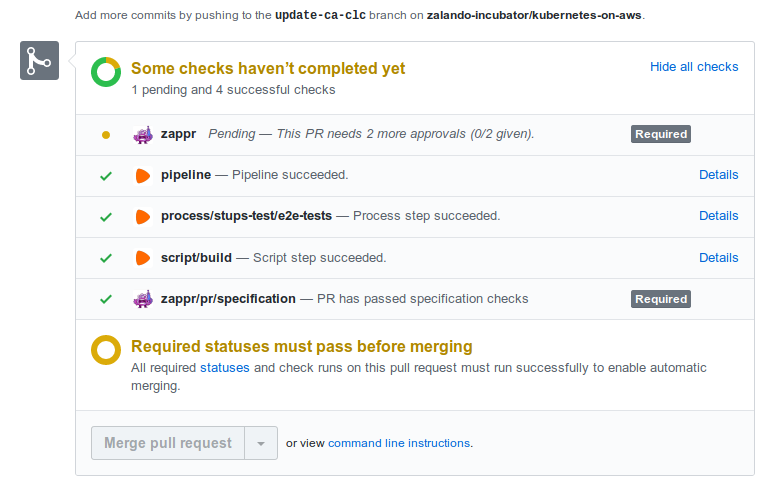 Each change moves through the different channels (git branches) until it reaches all production clusters ("stable" channel). 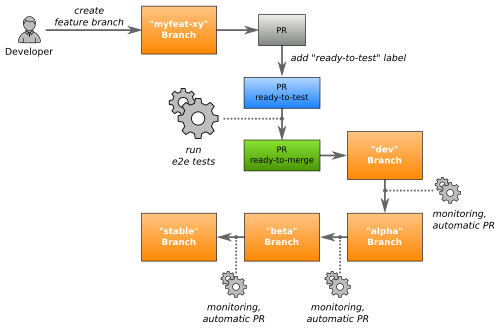 During both rolling update of cluster nodes and automatic scaling of the clusters, our infrastructure must reschedule application Pods away from nodes that are being decommissioned. Applications can use Pod Disruption Budgets (PDBs) to declare how disrupted they can be during an update. We defined the following SLAs for operations like cluster updates:

Application Pods are therefore forcefully terminated after three days, even if they defined a Pod Disruption Budget to prevent it. This behavior allows us to continuously update our clusters even if some applications are misconfigured.

Note that our users (development teams) can stop and block cluster updates anytime (e.g. if they detect a problem).

All clusters look mostly the same, there are only a few configuration options which differ between clusters:

The Cluster Autoscaler scales cluster node pools depending on resource demand thus not requiring manual configuration of pool sizes. Here a chart of one cluster autoscaling up and down over two days:

Some components need vertical scaling based on cluster size. We use the Vertical Pod Autoscaler (VPA) to avoid tuning these settings by hand. These system components use VPA at the moment:

Our smallest Prometheus instance uses just 512 MiB, others scale up to 9 GiB, like this graph shows:

Our main monitoring system is ZMON. ZMON has a concept of "entities": a ZMON entity can represent anything you want to monitor, e.g. servers, pods, or even teams.

Provisioning a new cluster will automatically register new entities (e.g. for the new AWS account, for the nodes, deployments, pods, etc). This allows having some generic checks and alerts which automatically become active for these new entities.

Our Kubernetes team does not get alerted on restarting user pods or similar. Delivery teams are responsible for their applications end-to-end.

How much does our setup diverge from a "vanilla" Kubernetes (from a user perspective)? The answer is: "not much":

Our approach served us well in the past years and allowed us to scale without increasing our team size:

For more information, see our repo with public Zalando presentations and find some members of our Kubernetes team also on Twitter:

Also feel free to mention @ZalandoTech and ping me on Twitter.

The recorded video of my AWS re:Invent talk on how Zalando runs Kubernetes clusters at scale on AWS is online. The talk's content is very similar to this blog post.