KubeCon EU happened in Barcelona this year (May 20 - 23). This is my personal conference recap. I will not talk about any of the official KubeCon announcements (as there are enough other places to read about them).

I flew in on Sunday and attended the CNCF End User Partner Summit on Monday. The goal was to meet people and companies in the End User Community face to face in a vendor-neutral zone. Spotify and Adidas presented their cloud-native journeys before lunch. The afternoon was reserved for unconference topics. I joined two round tables: (1) SIG Developer Experience and (2) "PowerUser tools" (notes are in the private CNCF enduser repo, only accessible by End User companies).

Here the "PowerUser tools" we briefly talked about at the second round table:

My take-away is that the most used and liked tools are the basic CLI helpers like kube-ps1, kubens, and stern/kail. Note that the list is ordered by time it came up during the discussion, if you know other valuable "PowerUser" tools, please let me know.

I really like the CNCF End User community as it allows to exchange experiences with organizations on a similar journey. While companies and industries are different, there are enough touch points to talk about challenges, e.g. with regards to cloud native developer experience. Thanks to Cheryl for organizing the face-to-face meeting!

AWS and Weaveworks organized a Birds-of-Feather on Monday evening. A few lightning talks (I also did one about kube-resource-report) were followed by a panel discussion with AWS, Weaveworks, and users. I don't remember all the details, but it seemed that there are still enough open questions around how to set up and maintain clusters on AWS.

I attended very few breakout sessions. I only watched the keynotes, gave my own talk (to 1500 people!), and attended the following sessions:

I really liked that we had multiple failure talks this time (incl. Spotify's keynote), so I could add four more entries to https://k8s.af

Most of my time I spent in the booth area and talked with people (the "hallway track").

All KubeCon talks are recorded, so I planned to bet on the hallway track and meet as many people as possible. I would definitely recommend this to all conference attendees: 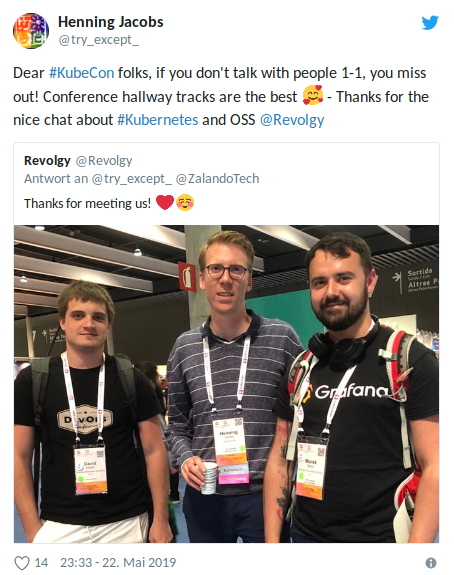 Some of the things I learned:

And of course my Zalando colleagues:

The hallway track and conference is best ended with a nice post-KubeCon social! 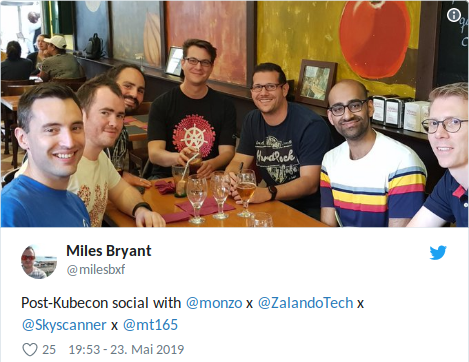 I did not mention the awesome party, won't complain much about the venue (far from optimal, long distance walks, distracting noise in 8.1), the not-so-good food, and the enormous amounts of produced garbage. KubeCon is all about meeting people and exchanging ideas & experiences --- in this sense KubeCon Barcelona was a huge success for me (as always)!